It’s no secret that my husband and I love to travel. Since we’re both teachers, we are a bit limited in how much we can spend on a trip, but we exchange that for the benefit of having 7-8 weeks of freedom during the summer (when we aren’t prepping for next year). We were married in 2009 and have tried to take a trip every year since then and have covered almost every state east of the Mississippi River and a few out west. So, without any further ado, here are my top five favorite spots.

We swung through Charleston back in October 2009 on a quasi 2nd honeymoon roadtrip. I’d always heard about how nice Charleston was, but it actually surprised me. We stayed on the coast at Wild Dunes Resort, which I got a pretty great Priceline deal on. Having grown up in Alabama, I’m used to the powdery white sand beaches of the Gulf Coast, so I was in for a big shock when we hit the Atlantic. The sand was flat (and not sticky!), the sunrises were amazing, and the people were friendly.

We spent the next day in Charleston itself. Our typical method of exploration is to find a parking spot for the car and then walk as far and as aimlessly as possible. Before long, we found ourselves at the Charleston Market commons. Set in open-air brick buildings that are hundreds of years old, the market is the premier shopping location for pretty much anything. From food to clothing to trinkets to art, you can find almost anything you’d want in one of the loveliest shopping spots in the southeast.

Speaking of food, one of the best restaurants we’ve ever eaten at was in Charleston. Called SNOB by locals, Slightly North of Broad offers southern cuisine with a bistro flair. Eat there. Seriously. Go do it.

I’m a sucker for a good view. You’ll find that many of my favorite spots involve the mountains. Shenandoah National Park is no exception. On our way to Washington DC (another favorite but not top 5), we went off the commercial, beaten path and took Skyline Drive. Filled with tons of pull-off spots with amazing views, Skyline Drive puts you eye-level with the clouds so that you can see miles and miles of American landscape beneath you. There are only a few entrances and exits, so only commit if you’re not on a time schedule and don’t have any immediate potty needs (unless you want to go… ahem… natural). We plan on taking this route again when we return to Washington DC this summer, and I’m already anticipating the scenery. 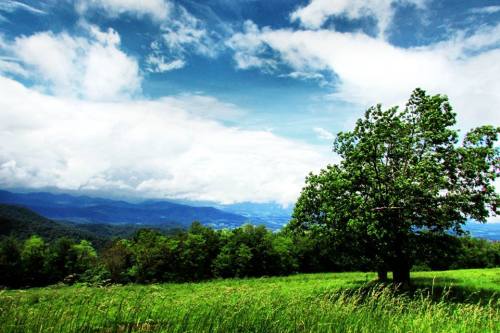 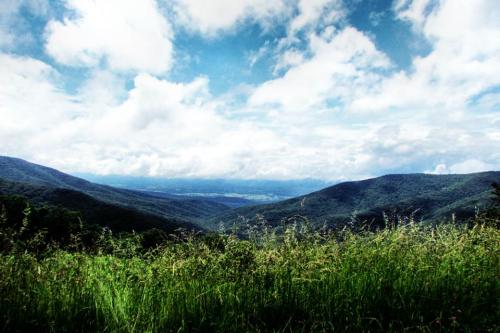 Part 1: The City
I was admittedly very nervous about going to NYC. The media does a pretty great job of making the city seem dirty, overcrowded, and full of rude people. While it was definitely extremely crowded, I was very pleasantly surprised to find it clean and friendly. Not only that, but it was just plain exciting and really fun. We stayed in Newark, New Jersey, which I highly recommend, and took the subway into the city.

For two days, we walked and ate our way from one side of the island to the other and tried to hit all of the high points – Central Park, Times Square, the southern pier, the World Trade Center Memorial. We had some kick-butt pizza and cheesecake at Joe’s Pizza and even – get this – ran into a college buddy at a random street corner. How unlikely! Turns out that I love NYC and want to go back when we have some more time (and money).

Part 2: Upstate
Upstate New York is by far one of the prettiest areas I’ve seen in the country. We drove straight across the state, heading from Camden, Maine, to Niagara Falls, New York, and stopped at a few state parks along the way. These parks have now become some of my favorite places in the US.

The first one we went to was Watkins Glen State Park. I don’t know how else to describe it other than saying that it’s like visiting Tolkein’s Rivendell (minus the elves, of course). It’s essentially a narrow canyon canopied by trees and filled with waterfalls and vegetation. Steps have been carved into the canyon itself, which is amazingly cool. You HAVE to see this place. 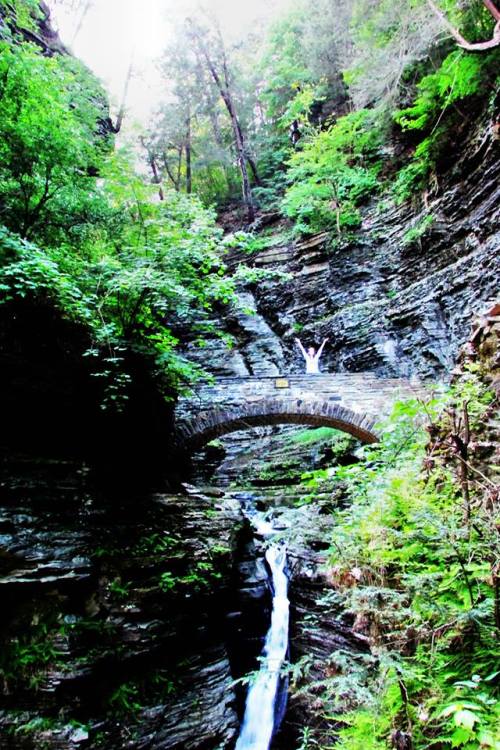 The next was Letchworth State Park. Called the “Grand Canyon of the East,” Letchworth has some of the biggest, most beautiful waterfalls I’ve ever seen. There are two falls – the Upper and Lower falls, and they are just amazing and powerful. We spent a long time just walking along the edge of the canyon and even had lunch at a restaurant that (if I remember correctly) overlooked the Upper Falls. I’d love, love, love to get back to New York sometime in the future and to show our son the beauty of these state parks. 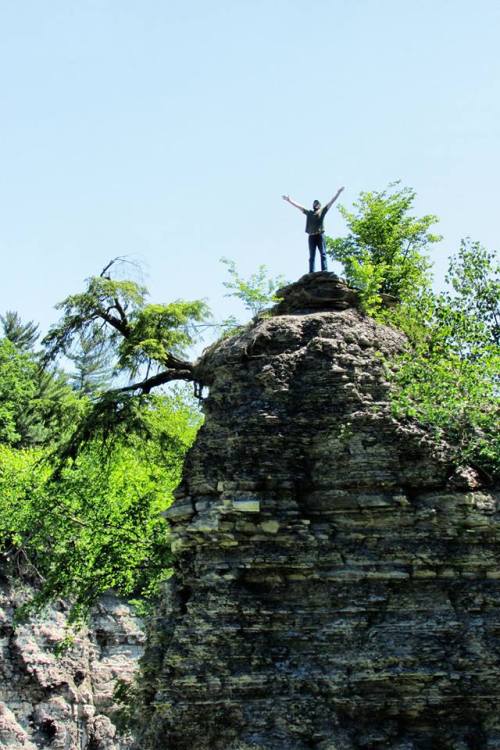 When we married in 2009, we were given a very generous wedding gift by one of Evan’s uncles and his wife – plane tickets to Maine. It’s not exactly where I thought I would honeymoon, but I am SO glad we went. In fact, we loved it so much that went back in 2013 during our epic road trip.

So what’s so great about Maine? For starters, we went in July, which is when the temperature in Alabama averages 95 degrees and the air is so humid that you might as well breathe in hot pea soup. Maine in July? Perfect. We stayed along the coast, not far from Camden, which is a really cute harbor town full of shops and restaurants that overlook the water.

In 2009, we stayed in a cabin at Point Lookout Resort (which was absolutely beautiful), but we mostly camped when we returned a few years later. To be honest, I actually preferred camping, because the views (and prices) were hard to beat, especially if you had a hammock you could string up between some trees, and we did. We also stayed a night in Bar Harbor, which is home to Cadillac Mountain, the highest point on the East Coast. This was another one of my favorite places – the view is incredible, and it isn’t (or wasn’t for us) terribly overcrowded so you can actually feel the peace that comes with the environment. 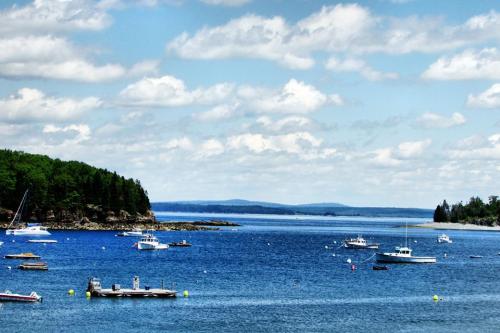 One more thing – if you go to Maine, you have to eat lobster. Drive until you find a restaurant that’s right on the water, preferably one with a dock, and then order pretty much anything on the menu. Maine is why Seafood Newburg is one of my favorite dishes EVER (as found at The Lobster Pound in Lincolnville). And one more thing – the locals will try to get you to taste a Moxie Soda… do it at your own peril.

Jackson is definitely the outlier of the bunch and was somewhat spontaneous on our part. While snowed in off and on for nearly two weeks in February 2015, my husband and I were getting stir-crazy. We had an almost-one-year-old son by this point and, having missed our big trip opportunity the previous summer due to having a newborn, we decided to book a trip to somewhere we both had on our bucket lists – Jackson.

Wyoming did not disappoint. We stayed in a cabin on the Snake River about 20 minutes north of Jackson and spent an entire week exploring the Grand Teton National Park and Yellowstone National Park. Yellowstone was very beautiful (and HUGE), but it wasn’t necessarily my favorite. Why? I couldn’t tell you. Between Old Faithful and the Grand Prismatic and the mountains, I should have loved it, but it just didn’t strike too much of a chord for me. My only guess is that it’s because I’m used to the lush forests of the Smokey Mountains, and Yellowstone is quite different.

So if Yellowstone wasn’t my favorite, then why is Wyoming #1? Because of this: 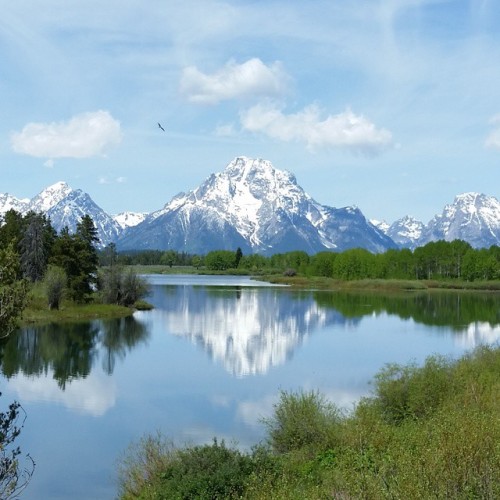 The Grand Teton National Park is absolutely breathtaking. Snow-covered mountains; beautiful, green forests; and winding rivers make this park my favorite thus far. The town of Jackson was pretty neat (especially the square), but what really won me over was just the beauty of the scenery. I told you – I’m a sucker for a good view – and the best views come from nature in my experience. 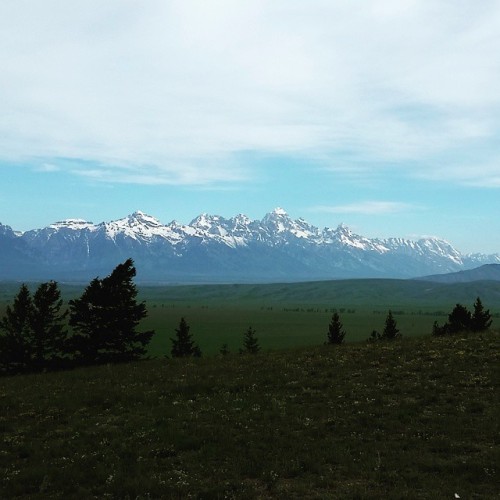 I really don’t have anything else that I can add to my description of Jackson Hole – it’s a place unlike anywhere you’ll find east of the Mississippi River. Even the airport is incredible. Wildlife is abundant, the air is clean, and the mountains are gorgeous. If you ever get to go, rent some bikes and pedal through the park – it’s worth the energy expenditure. And if you have been, you know what I’m talking about. The Grand Tetons are unfiltered, untouched beauty that cannot be replicated or faked. Take my advice and GO!